Wheat is the most consumed cereal

Today, wheat is still the most consumed cereal in the world. It is true that its direct consumption has decreased in countries like the United States. However, the fact that their flour is used as a food additive has caused the annual wheat intake per person to increase.

Nitrogen has long been used as a fertilizer in wheat fields because it improves soil yield. But in recent decades the amount of nitrogen applied to wheat crops has increased dramatically: 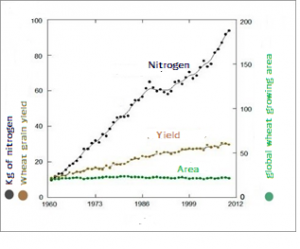 Is there a relationship between excess nitrogen in wheat crops and the prevalence of celiac disease?

The recently published study suggests that excess of the element could be behind the increase in celiac disease. According to this research, from the 1960s to now, the use of nitrogen in wheat crops has multiplied by 10. But, how would the increase in Celiac Disease be explained? Experts suggest that wheat with excess nitrogen transfers to the grain a greater amount of gliadins, that is, the gluten proteins that activate the immune system of celiacs.

“The excess of nitrogen in wheat crops would explain the high prevalence of celiac disease.”

The researchers insist on the necessary prudence when sharing and interpreting the results. The study clarifies that it could be an environmental factor more involved in the development of Celiac Disease. Many more studies would have to be done to determine that there is a relationship.