Down Syndrome and Celiac Disease

Down syndrome is a genetic disorder that occurs in 1 in 600-700 pregnancies. It is caused by the presence of an extra copy of chromosome 21, (trisomy of pair 21), so that people with Down syndrome have 47 chromosomes instead of 46. Precisely in couple 21, we can find some of the related genes with the immune system. Therefore this could be the reason why the population with Down syndrome is more prone to autoimmune diseases. 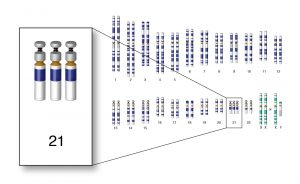 The most commonly diagnosed autoimmune disorders include: hypothyroidism, type 1 diabetes, and celiac disease. Thus, people with Down syndrome are at higher risk for these disorders due to their weak immune response and abnormalities in the immune system.

“Children with Down syndrome are up to six times more likely to develop Celiac Disease than the general population.”

Once the diagnosis is confirmed, all information about Celiac Disease should be communicated as soon as possible to the child, young person or adult with Down syndrome.

Most importantly, they should be taught to distinguish between what they can and cannot eat, as well as the health consequences of eating foods with gluten. Special attention should be paid: